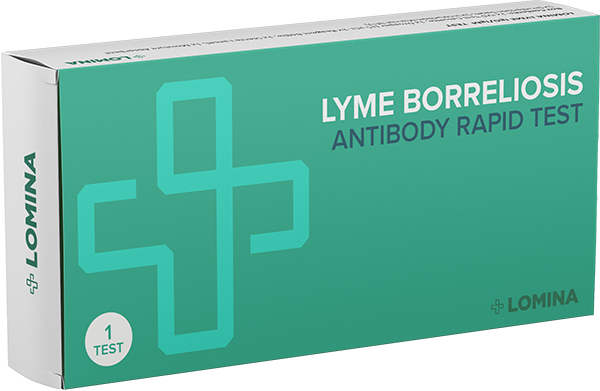 Lyme disease is an infectious disease caused by bacteria of the genus Borrelia, which are transmitted by ticks. The most common sign of infection is a spreading area of redness on the skin, known as erythema migrans, which begins at the site of the tick bite about a week after it occurs. The rash is usually not itchy or painful.

The Lomina Lyme IgG/IgM Test is a qualitative membrane immunoassay for the detection of IgG and IgM antibodies to Borrelia in whole blood.

Lyme disease is an infectious disease caused by bacteria of the genus Borrelia, which are transmitted by ticks. The most common sign of infection is a spreading area of redness on the skin, known as erythema migrans, which begins at the site of the tick bite about a week after it occurs. The rash is usually not itchy or painful. Approximately 25-50% of infected persons do not develop the rash. Other early symptoms may include fever, headache and feeling tired. If left untreated, symptoms may include, but are not limited to, loss of the ability to move one or both sides of the face, joint pain, severe headaches with neck stiffness or heart palpitations. Months to years later, repeated episodes of pain and swelling in the joints may occur. Occasionally, people experience shooting pains or tingling in the hands and feet. Despite appropriate treatment, about 10 to 20 % of people develop joint pain, memory problems and fatigue for at least six months. Lyme disease is transmitted to humans by the bite of an infected tick of the genus Ixodes. Usually, the tick must be attached for 36 to 48 hours for the bacteria to spread. The disease does not appear to be transmitted between humans, other animals or through food. Diagnosis is based on a combination of symptoms, a history of contact with the tick, and possibly testing for specific antibodies in the blood. Blood tests are often negative in the early stages of the disease.

The test is developed and tested for the use of blood samples taken from a finger.