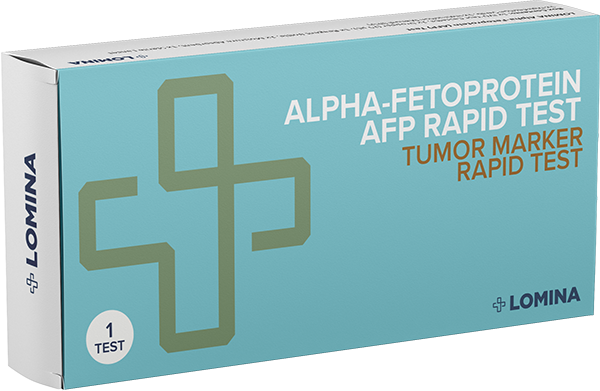 Lomina The Lomina Alpha-Fetoprotein (AFP) Test is a rapid chromatographic immunoassay designed for the qualitative detection of AFP in human whole blood, serum or plasma to aid in the diagnosis of hepatocellular carcinoma or frank fetal neural tube defects.

Alpha-fetoprotein (AFP) is normally produced during fetal and neonatal development by the liver, yolk sac and in small concentrations by the gastrointestinal tract. By the second year of life, AFP concentrations decline rapidly, after which only trace amounts are routinely detected in the serum. In general, healthy adults have serum AFP concentrations below 10 ng/ml. Elevated levels of AFP are found in several malignancies, including hepatocellular disease, liver cancer, testicular cancer and occasionally other tumours of entodermal origin. AFP is also used to detect early tumours in people at high risk of liver cancer. Studies in patients with extensive liver metastases or viral hepatitis have also shown slightly elevated or persistent AFP levels. In areas where liver cancer is common, the use of AFP testing for screening has led to the detection of many early-stage cancers. Detection of elevated AFP levels can also be used to detect open fetal neural tube defects. The Lomina AFP test uses a combination of particles coated with anti-AFP antibodies and anti-AFP antibodies to detect elevated levels of AFP in whole blood.

The test is developed and tested for the use of blood samples taken from a finger.